GEPAN continued its Christmas tradition of gifting toys to children. This year, more than two hundred children on the Linden – Soesdyke Highway, Essequibo Coast, East Coast and East Bank Demerara were treated to a bit of good Christmas cheer. Book bags and stationery were provided to children in several communities while others received clothing. Food hampers were also provided to those mothers in need.

Above images: Faces of Swan Village situated on the Linden-Soesdyke highway. Over 50 children received toys, book bags and stationery. The activity was organised with the help of community leaders. The population of Swan is mainly indigenous and mixed, resulting from internal migration from other parts of Guyana.

We used this occasion to reach out to the families living on the Demerara river dam along Grove and Great Diamond (the settlement includes the stretch of river bank all the way to Herstelling). These households are comprised of both Guyanese families and Venezuelan migrants who live in deplorable, unsanitary conditions. The dam runs paralell to houses situated along the Grove main road. Some families, mainly Guyanese, fish for a living while migrants depend mostly on day-to-day jobs to survive. During our visit we discovered a general absence of running water and sanitation facilities (no toilets or bathrooms). From its appearance, the trench that separates the line of shacks on the dam from the backyards of the houses in Grove seems clogged with garbage, polluted and unfit for  home use.

CDC officer accompanying us on our mission

Pig pens on the river dam

Above images: A glimpse of the surroundings of the Grove and Great Diamond river dam area on the East Bank Demerara.

In this area, toys were gifted to 47 children aged 2 to 9. There were also pregnant mothers, infant children and older children in beneficiary households. Most children living in this area do not attend school (irrespective of nationality). Children issued from Venezuelan households appear to be fully bilingual, speaking both English and Spanish. Almost every migrant household interrogated had at least one family member of Guyanese ancestry (generally their immediate parents who left Guyana in the 70s or 80s).

Overwhelmed by a cold

Above images: Some of the children of the Grove and Great Diamond river dam.

A chat with a young Guyanese migrant who was born and raised in Venezuela revealed that he was experiencing difficulties integrating his new environment due to what he described as the perceived biases and distrust from members of neighbouring communities. He  explained that in addition to being exploited and underpaid  as a labourer on construction sites, some Guyanese he encountered can be hostile and abusive to Venezuelans, regardless of the fact that many migrants are of Guyanese descent.

Regarding the risks associated with migration, the UNFPA notes that while all migrants are at risk of abuse and exploitation, women and girls are particularly vulnerable and constitute  71 per cent of all human trafficking victims. Poor sanitation as is the case in Grove and Great Diamond, along with the absence of a stable source of income and the language barrier, are among the factors that accentuate the vulnerability of migrant women and girls to TIP and sexual exploitation to TIP and sexual exploitation.

In anticipation of the approaching rainfall, this young migrant boy rushed to cover his sick dog.

Among the things we discovered during this outreach was that, while Venezuelan migrants are coming to Guyana to work and flee the harsh living conditions in their homeland, there are Guyanese families who have over the years taken up residence on the dam seem to have grown comfortable with their situation and do not show interests of wanting to relocate to what can be deemed better avenues. Some of these households are engaged in small business activities such as small-scale pig farming on the dam.

Due to the sensitive nature of this intervention, GEPAN relied on the guidance and support from the Civil Defence Commission (CDC) who accompanied our team and helped to provide valuable insight.

We would like to thank our faithful and generous donors who contributed toys, food and clothing to make these activities a success. Special thanks to Ms. Saudia Roberts from the CDC who took her time introducing us to families in the Grove and Great DIamond area, and assisting in conducting this outreach.

Children from the Grover river dam

To complete our end of year activities GEPAN will be distributing food hampers to families in need.

For more information on what we do, visit us here or follow us on social media! 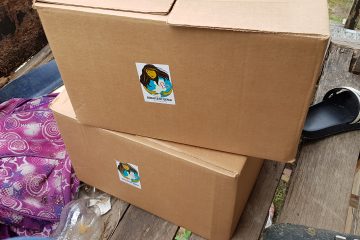 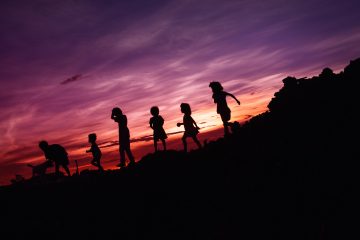